COVID-19 RESPONSE - We are committed to supporting our scientific community during this pandemic. Learn more Bioluminescent cytotoxicity assays offer the user increased detection limits, speed, and accuracy, and have been well documented (Crouch et al., 1993). Healthy cells maintain a high constant ATP concentration in culture. During proliferation, the total ATP in the culture increases in line with cell number. Conversely, dying cells are unable to maintain their high ATP level, as synthesis becomes compromised, and so levels are seen to reduce. The level of ATP present within a culture is indicative of the number of viable cells present, and ATP assays have been shown to be one of the most predictive general cytotoxicity methods.

An alternative indicator of cytotoxicity is damage to the plasma membrane. This allows agents to enter the cells (e.g. propidium iodide) and cell components to leak into the surrounding medium. One of the enzymes released when cell membrane damage occurs is adenylate kinase (AK), a ubiquitous protein present in all eukaryotic cells (Squirrell and Murphy, 1997).

The ViaLight® Plus and ToxiLight® Cytotoxicity Assays developed by Lonza exploit these characteristics of cells and enable detection of changes using bioluminescent methods. Both assays have the typical sensitivity of < 10 cells/well. The ViaLight Plus assay has been formulated to produce a long glow signal with a linear decay rate that is irrespective of cell number. The ToxiLight assay is a homogeneous, non-destructive assay enabling the direct assay of wells containing viable and non-viable mixed populations. The assay can also be used on samples of culture media taken from experimental wells, enabling the remaining cultures to be assayed using an alternative method if required. This is a useful feature when samples are precious and multiple analyses are preferred.

K562 human leukemia cells were serially diluted in complete media and triplicate 100-µL aliquots plated into white-walled luminometer plates. The ATP levels of each well were assayed using the ViaLight Plus assay. Briefly, the cells in each well were lysed by the addition of 50 µL of cell lysis reagent and a 10-minute incubation (at room temperature). Following the lysis, 100 µL of ATP monitoring reagent plus was added to each well and the mixture allowed to equilibrate for 2 minutes. The plate was placed into the SpectraMax® L Luminometer and a 1-second read taken of each well using a preconfigured protocol in the SoftMax® Pro Software (settings shown in Table 1). The results are shown in Figure 1. 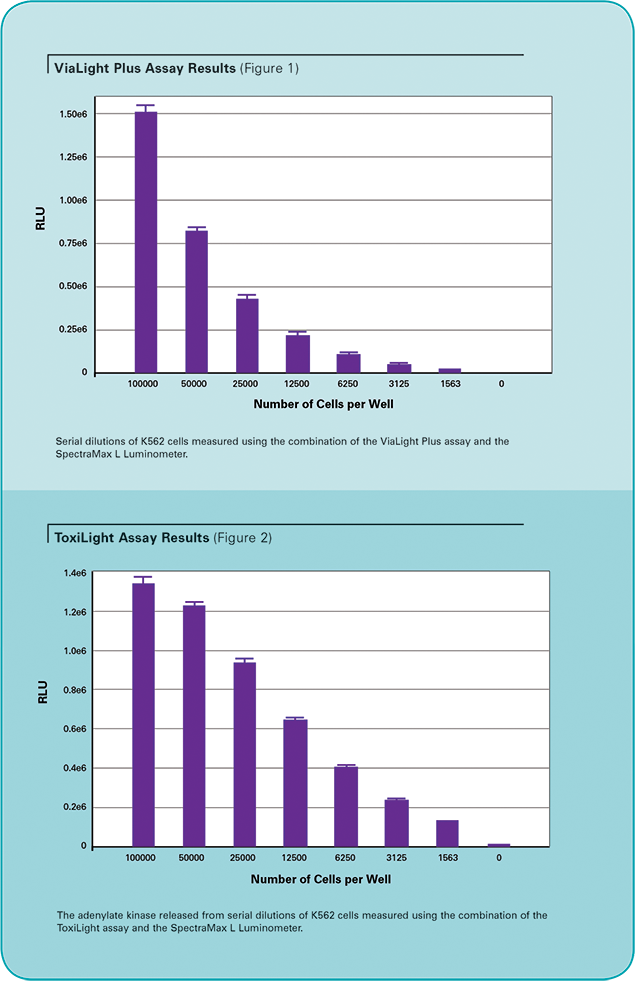 For the ToxiLight assay, 100-µL samples of the serially diluted K562 cells were plated into white-walled luminometer plates. This assay is normally non-destructive to the cells, but for the purpose of demonstrating assay sensitivity, cells were lysed to release their total adenylate kinase (AK). 5 µL of ToxiLight 100% lysis reagent was added to each well, followed by a 10-minute incubation at room temperature. The released AK was assayed using the ToxiLight assay. Briefly, 100 µL of AK detection reagent was added to each well and the mixture incubated for 5 minutes. The plate was placed into the SpectraMax L Luminometer and a 1-second read taken of each well using a preconfigured protocol in SoftMax Pro Software (Table 1). The results are shown in Figure 2.

Both assays provide excellent sensitivity and reproducibility. They are robust, simple to use, and each has its own distinct advantages. The ViaLight assay will show how many viable cells are present by measuring the ATP they release after lysis. The ViaLight assay can show both proliferation and cytotoxicity as compared to an untreated control. As the ToxiLight assay is a non-destructive assay which will only measure AK released from damaged cells, it is a truer indicator of cytotoxicity. These cells, once they are capable of releasing AK, will not recover. This assay will not indicate cells that are healthy or have proliferated.

The ToxiLight assay’s non-destructive sampling protocol enables its use alongside other assays, providing flexibility in experimental design. To demonstrate this, U937 human leukemia cells were treated with camptothecin, a DNA topoisomerase I inhibitor, and were assayed using both ViaLight Plus and ToxiLight reagents as described below.

100-µL samples of U937 cells (5x105 cells/mL) were placed in a 96-well plate, and increasing concentrations of the drug camptothecin were added to the cultures, which were then incubated for 24 hours. Following the incubation step, the samples were assayed using the ToxiLight reagent, following the sampling protocol. 20 µL of cell supernatant was transferred to wells of a white-walled 96-well plate. 100 µL of AK detection reagent was then added to each well, followed by a 5-minute incubation at room temperature. The remaining culture sample was assayed using the ViaLight Plus assay as described above. The assay plates were placed into the SpectraMax L Luminometer and a 1-second read taken for each well using a preconfigured protocol in SoftMax Pro Software (Table 1). The combined results are shown in Figure 3. 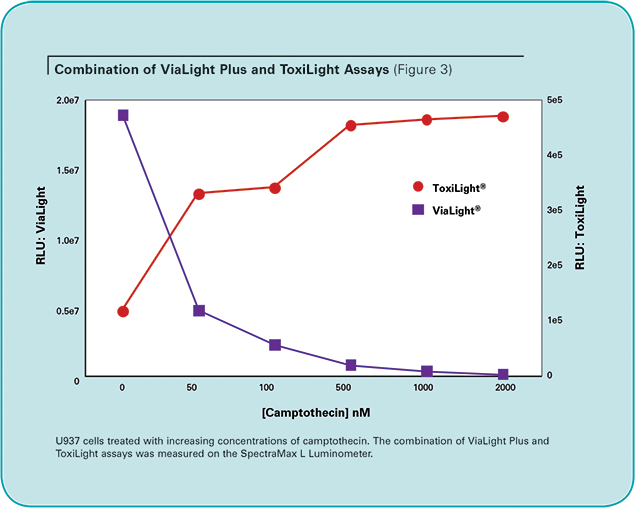 The assumption that fewer viable cells are the result of a cytotoxic event may not always be correct. The combination of the ViaLight and ToxiLight assays is an essential tool to verify this. In this experiment the decreasing RLUs as indicated by the ViaLight Plus assay are accompanied by an increase in the amount of leaked adenylate kinase as measured by the ToxiLight assay. The combination of these assays can provide a more complete picture with minimal extra effort (Table 2). The assays are conducted on the same samples, so the data can be directly compared from well to well and, if required, an extension of the ToxiLight assay’s sampling procedure can provide a useful indicator of the kinetics of cell death.

It is up to users to decide which assay is best suited to their application, but as we have demonstrated here, the combination of the ViaLight Plus and ToxiLight assays provides so much more information that it should be carefully considered. The SpectraMax L Microplate Luminometer and SoftMax Pro Software from Molecular Devices combine well with both the ViaLight Plus and ToxiLight assays from Lonza, providing researchers with a fast and sensitive combination of technologies in the field of cell death. High sensitivity and a large window of detection ensure that cell cytotoxicity is readily detected.

SoftMax Pro GxP Software provides additional tools and features for users who must demonstrate GLP/GMP compliance with FDA 21 CFR Part 11 requirements. Optional hardware and software validation tools are available to speed and simplify the validation process by making it easier to demonstrate compliance of data collection and analysis.

For increased throughput requirements, the StakMax® Microplate Handling System from Molecular Devices integrates with SpectraMax Microplate Readers and enables automated processing of batches of 20, 40, or 50 microplates.